From the gate of your mother’s house, you could swing up on a horse, clop down a few quiet streets, cross the river and then there was nothing but packed dirt roads good for a gallop, tiny temples perched on mountainsides, villagers gathering firewood and grasses, miles and miles of rice paddy. You would come around a hill and see the paddy rising in terraces from the valley floor, marching ponderously up the slopes, shrinking as they go.

These hills are as big as some mountain ranges. They are foothills only compared to the sweep of the snowpeaks that float behind them: The Himalaya. When you saw the mountains you would finally feel that the city was behind you. It’s not that you could relax: things here require your full attention.  But something in you eased, a little.

You would follow broad forest paths through the hills then take goat tracks that clung to the mountain and shed pebbles into steep drop offs as you rode by, going too fast on an unpredictable horse. You would pass through villages, and tiny old ladies would call to you from the fields. They would ask you to have chai and chapattis (flatbread) with them. You would sigh, because it meant dismounting, which meant remounting. The mare would stand steady and quiet while you held her, and walk like an angel when you took a village kid up in the saddle for a quick pony ride, but when it was time for you to mount up she basically tried to kill you. If she knocked you down, she would then trample you. You had to vault up quickly, hauling her head around to the right so she didn’t give you a bite on the ass to hurry you into the saddle. She was sinewy, tough, and quick as a snake.

You get to know the villagers. You help haul firewood, you carry packages and messages between the scattered settlements. You are given chai and admonitions. They joke and call you “Kalki didi,” after the last incarnation of Vishnu who will come to end the world, riding a pale horse. It is better than what they call you in the city.

You mount up (quickly), turn your body toward home and the horse beneath you follows and carries you at the same time. You ride her like a current. You go home in the dusk to the sound of temple bells and prayer call. Cows are coming home, plodding and lowing. The air is dust and jasmine.

You have been gone for 10 years now, and these memories are even older than that. Now you come back, and there’s an airport with a glass elevator. There are luggage trolleys, a gift shop. You get in a Toyota and the driver takes a back way home because Rahul Gandhi is speaking at the Parade Ground and there are crowds. You remember when his grandmother was assassinated and there were riots and killings. You remember when his father was assassinated, too. You were in the States by then, and you remember thinking: that bloody country. You think about this as you take the back way home. You are excited to be here. You know it’s going to be different. You’re ok with that.

The roads you take are packed with vehicles: trucks, cars, putt-putts, scooters. Everything has an engine. Traffic is both lumbering and nimble. Car horns sound, not in complaint but orientation: a wolf howl, saying: I am here. I am here. You swerve and bully your way through. You parry and dodge.

The roadsides are packed with stalls and carts selling: pyramids and piles of oranges, apples, red winter carrots, potatoes, T-shirts, shoes, and everwhere everywhere plastic plastic plastic: buckets and bags and baskets and toys. There are no sidewalks and no parking lots, the traffic and the bicycle guys and the pedestrians come together with the inevitable and irresistible force of the sea meeting the land. Road verges foam like surf. Everyone is in motion but nobody gives ground. Pedestrians in jeans and dhotis, leather jackets and shawls, weave and thread through moving and parked vehicles and talk on their phones. A dog sits down and has a good scratch. Everyone goes around him, not even looking down. The dog trots off.

Behind the pedestrians and the carts are the shops. Steel shutters on cement block and plaster buildings, built to last. They are streaked and mottled with black monsoon stains. Above are apartments and homes, washing hung out to dry, kids hanging off crumbling railings. The buildings are solid, the doors and windows square and steady. Everything else: doors, curtain rods, shutters, is askew. The city is festooned with electric wires, a snarled canopy of current. A festival of lights.

Amid this are shanty tarps and tin roofs. You have no idea if the rickety shack you are looking at is a shop, a home, or both. These structures look fragile but seem to have stood for a thousand years. Here and there a massive tree survives, coerced into propping up the world.

You pass by a man squatting on the ground, his head tilted back. There is another man behind him, holding a straight razor to his throat. Only after they vanish in the dust of your wake do you figure it out: a barber, shaving a customer on the side of the road.

The road is curvier now, you take disorienting turns onto side streets with less activity and fewer crowds. It is still wall-to-wall buildings but the noise has lessened. Now and then you catch a glimpse of the hilltops: a familiar confluence of peaks catches your eye. You ask the driver what the massive cement building under construction on your left is, and he says they are building an IT park and call centers. You feel a sense of dread. The road curves left, right, left again. You look around, crane backwards, look up at the hills, look at the city surrounding you and think: no. No. It’s not. But the next curve is a sharp one to the right and you are descending towards the riverbed and then you have to acknowledge that you know where you are.

These are your dirt tracks, your goat paths. These are the fields where you helped gather grass for winter forage. There, where the IT center is rising: that was the maze of camelthorn bushes with their small, bright flowers and vicious thorns that left your calves bloody when the damn horse swerved into them. This rusty steel bridge, this was the shallow curve of the seasonal levee over the riverbed where you would open the horses up to canter. You had to remember to slow down and look for rare but lethal trucks barreling over the hill: you could never hear them over the reverb of hoofbeats, the wind in your mount’s lungs and your own. The beating of your hearts drowned out the world.

This, here, is the open stretch where you could finally leave off the battle and let her run, full and true, nothing between you, nothing holding you back, nothing before you but the hills. This is your refuge: built upon, populated, grimy. Strewn with trash. Crumbling as though it has been like this for a thousand years. As if there were never anything else here at all.

Some days later, you walk down to the Ganga during arti, the evening prayers to the sacred river. You have to stop at the market first, to buy offerings: little leaf-boats are piled with marigolds. A rose makes a scarlet ruffle amid the orange petals. There is a rough clay dish with a hunk of camphor to light, and two graceful incense sticks leaning out at an angle. The whole thing is about the size of a soup bowl. Although you are in a hurry, you raise the leaf-boat up to examine the construction. It is woven together by the fragile stems. Nothing more.

Priests are waving towering oil lamps at the river, and chants are broadcast on loudspeaker. There is a crowd milling around the priests and their dramatic accouterments but the verges are peaceful. Most people are carrying garlands of marigolds and roses, or little boats like yours. People spread out into clumps, then groups, then families. Some young guys strut around. The beach is rocky and the water is swift. It is not the color of any North American water you have ever seen. Not clear blue, this, but jade and opaque. You have journeyed to the source of this water, high in the Himalaya. There, it is white as milk.

You all huddle around and try to light the lumps of camphor in your flower boats. It takes some doing, what with the wind tearing down from the hills.

You take your shoes and socks off and wade in. It is cold. Offerings buck and scurry past. Rocks shift under your feet and the current urges you downriver. You stub your toe, plant your feet. You offer prayers for others, but when you light your own you don’t have anything to pray for. Everything seems ridiculous. Well, I carried it this far, you think, lowering the bright cup towards the water, so, here…just, take it.

It is dark now. The flame of your offering mingles with the reflections of electric lights. The priests are wrapping up their ritual. For now, their voices cannot reach you. Take it away, you think again. The river rushes on, ignoring you. The river rushes on, unchanging. Because of this, you will never be the same. 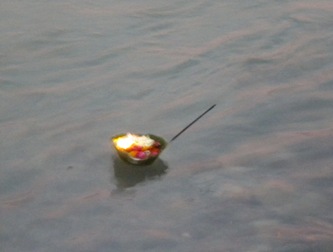