Our Lady of Morphine

Every time I go in for surgery, I say a prayer to Our Lady of Morphine, the Patron Saint of Pain Control, the Angel of Analgesics. 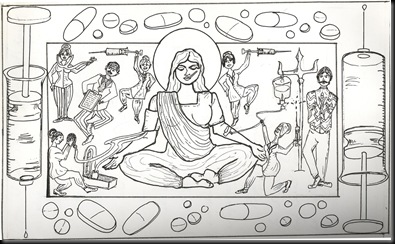 I drew this  self-portrait (ink and sparkly pen on recycled paper)sometime in late January/early February 2002, while in hospital in Dehradun, India, where I almost died. It’s where, raging with infection and gallstones, I would experience what the doctors called “episodes;” it always made me wonder why I was stuck watching this crappy show. It’s also where they fed me such large amounts of morphine that when I got back to the US, my doctors thought the hospital reports were loaded with typos. But, man, that pain was CONTROLLED!

I remember the Doc at Abbott—O, blessed Abbott, with your uniformed nurses, sterile gloves, and well-lit, pristine bathrooms-- looking at me incredulously over a clipboard and saying “You travelled commercial in this condition, while taking these doses? I assumed you were airlifted.” Nope. I was so out of it that my sister, standing in that 2 am fog outside of Delhi airport (mingled smells of jasmine, diesel and Jet A) had to gently steer me towards the bright airport doors;I was wondering off into the mist. She had to insist I get a wheelchair. “No, no.” I remember saying vaguely, “I feel fine.” The look on her face!

Changing planes at Schipol, sisterless, was a little more traumatic. I’ve had wonderful experiences in Amsterdam (who hasn’t?) but I’ve found that Holland, or at least it’s main airport, is not the most brown-skinned-people friendly place on the planet. I couldn’t get anyone to take my request for a wheelchair seriously. I wandered around, in tears, clutching my carry-on and a mysterious little ceramic house (it sloshed!) handed to me by the flight attendant in the First Class cabin. Ok, so I wasn’t airlifted but I honestly don’t think I would have lived through economy. I sat down, in considerable pain, self-pity and confusion, at a deserted gate, and started paging through my journal for my flight info. I came across Our Lady, and sat staring at her. Pills are scattered everywhere. Massive syringes drip. Doctors and nurses cavort. Our lady sits, serene, amid it all. I started to laugh.

I made it home, to encounter such wonders as Abbott NW Hospital, a husband nearly obscured by roses, a singing and dancing pig wearing a chicken suit, culture shock in the form of mac and cheese, and hippies in the basement. But that’s a story for another day.

I’ve had what I like to refer to as “health challenges” since then (I blame the pig). But just to be clear: the dimly lit, slightly grubby hospital in India saved my life. The non-uniformed nurses, who had a distressing habit of setting loaded syringes with unprotected needles down on my crowded bed-side table, would hold my hand and sing to me until the drugs kicked in. There are many kinds of pain control.

But also: when someone in my family is having a health crisis, we say: Hell, at least this isn’t happening in India.

Our Lady has been letting me down a little lately, so I thought maybe she’d like it here. Feel free to leave an offering.